Naoko, a young lagomorph searches her office for her keys and wallet, she soon finds, however, that things are not as they seem. A scifi image quest run by Cthulhlu. Initially updated almost every day, the rate of up dates has slowed substantially with the introduction of more characters and a more complex plot then "Help I'm stuck in a freaking room!"

The encountered characters so far in rough order of their inclusion in the story. 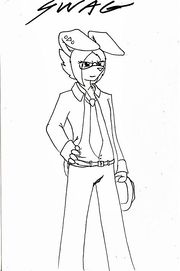 The first encountered character, Naoko is a twenty four year old Japanese lagomorph living in St.Ives, England, where she works as a paramedic. Somewhat relaxed for the most part, she has been seen to be quick to resort to violence to solve technology related problems, whether she carries this over to interpersonal actions has yet to be seen however. Something of a drag king she is fond of old fashioned mens clothes but has stated she doesn't mind wearing womens clothes from time to time. Her favorite possessions are her Sweet Knife (a butterfly knife that she is worryingly attached to) and her Classy Hat, at least until the latter was stolen.

Inventory consists of her pockets and SWEET BAG, she has so far found FOOD, CLOTHES, her SWEET KNIFE and a CLASSY WAISTCOAT. 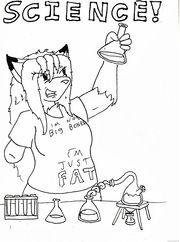 The second character encountered, Amy is an American fox of Germanic decent, with a extreme love of SCIENCE! and a slightly less extreme love of guns. Her distinguishing features are her plump, curvy physique, Missing right arm and Giant poofy tail, the tail in particular has drawn much attention, as it just looks so comfy... Personality wise Amy is cheerful and curious about the situation she finds herself in, this curiosity sometimes overwrites her self preservation instinct, which may lead to problems in the future. She is also worryingly fast to trust people she has only just met, holstering her weapon within moments of meeting Naoko and Korrok.

Inventory consists of her Sweet Tool Belt and holds 29 Bullets for her GIANT GUN, a set of Improved TOOLS and DUCT TAPE.

Her stat bars so far are Nerd, Attraction, PANIC, two severely under used Seduction and Social bar's and SCIENCE!

An extremely large reptilian quadruped that belongs to a species recently described as the second largest assholes in history. First encountered breaking out of its holding cell, interaction has so far been limited to a brief conversation, inexplicably in German, before it stole Naoko's Fancy Hat and disappeared into the ships lower level.

A strange looking creature, half way between a goat and a geko. Personality-wise he seems somewhat chipper, apparently happy to have company that isn't actively trying to kill him for once. While outwardly he seems comparable to normal carbon based life, the constant smell of chlorine reacting with bacteria that hangs around, coupled with the ingestion of highly caustic liquid as a form of intoxicant points towards a radically different biological set up. Claims to have worked as a "Scrapper" which he claims is basically menial labor.

A mollusc-like organism that seems to have recently undergone surgery to replace a missing "arm". Highly intelligent, ji claims to be a very important member of the "Council", a claim that seems to be supported by jir cache of high grade technology, the most obvious of which allows jir to float several feet of the ground and move at a fairly rapid pace. Possess a fair amount of knowledge regarding the ship and its operations, as well as a few less than legal devices. Seems content to follow Naoko and Amy around for now, jir intentions are unknown.

A small red crab like creature, claims to be a member of royalty but so far displays little in the way of manners or etiquette. Repeatedly challenges Naoko for the position of alpha but is undone by both her short attention span and the fact that she is as threatening is a slightly drunk kitten.

An unknown entity that contacted the group via a form of communicator, identity is unknown but it seems to be able to utilize technology present in the ship.

A officer of a unknown, but apparently highly powerful police force, who has yet to reveal its name. Its seems similar to a picture of a council species but further details are lacking.

The ships is the unnamed, apparently abandoned vessel upon which the quest takes place. Mechanically it seems to be in perfect working order, however the actions of its drones and certain other events seem to indicate that the software running the ship is in dire need of repair, with little to no security being functional, seemingly random abduction protocols and frankly laughable attempts to create a false environment for the abductees.

As the group explored further into the ship, they found it riddled with a rampant fungus like infection that seems to have breached the ceiling and floor of what they assume to be the main specimen room. As of yet the fungus hasn't shown any directly aggressive or predatory actions, however it dose seem to be using organic matter to fuel its growth.

The technological capabilities of the ship are at this time unknown, however it does seem to possess both advanced robotics, anti-gravity, the ability to affect the mass of a object and what is either a functioning teleport system, or some form of instant destruct/construct nanite cloud.

So far four out of six floors have been visited, and only a tiny part of those floors has been explored, the group being cautious in its exploration.

The universe of Abducted is a chaotic one, vast alien empires held back from war only by the sheer impracticality of maneuvering vast numbers of soldiers and the abundance of un-populated planets free for colonization. The main hazard to space travel seems to be the technology left behind by a long extinct species of xenophobic tyrants called the Alvari, who upon realizing that there civil war was leading to their extinction, reprogrammed all their technology to deliberately malfunction when used by non-alvari. Even several million years later alvari technology is still unmatched and poorly understood, even the smallest piece of alvari technology can cause devastation to whole planets.

Appearances by the case Inside the Quest.