In the island of Primordia, an insomniac cop living in the luxurious "Upper City" is deployed to the "Middle," the main area of the working class. There he soon learns of his ulterior role... 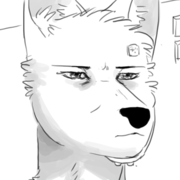 Aiden is a seemingly average cop just trying to make a living and finishing his term. He is stricken with constant bouts of sleep deprivation that have been going on a couple months before the story begins. When he receives an assignment once again to the Middle City, he experiences problems even worse than he could ever imagine. 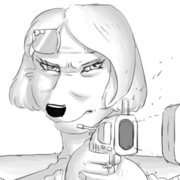 Independent, bitter, and greatly eager to take care of issues speedily, Massey is not one to mess around. She is a higher ranking member of the police force who has been deployed to the Middle for at least several years and going. Armed with special gear and a Heated Blade, Massey goes out on her way to clear the Middle of criminal filth and carries little empathy for anyone. 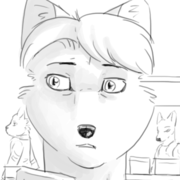 New to the force, Weathers is eager to learn, but quite a timid young anthro. Coddled by his rich parents and having lived his entire life in the luxury of the Upper City, Weathers first assignment to the Middle is a bit of a culture shock to say the least. He sticks close to Aiden, seeing him as a mentor of sorts, although it's not long before he's inflicted with strange mental troubles. 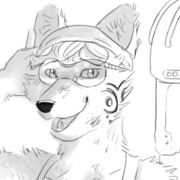 Mel is relatively young, but has a brilliant mind for mechanics and electronics, and has proven himself worthy enough to be a part of the Research Institute of Primordia; however, he has not lasted long because of his dangerous projects, and thus decided to become a freelancer. He provides much of his works to the Police Force so that he can be closer to his best friend, Aiden. He and Aiden had grown up together in the same orphanage and were adopted under the same foster parents. 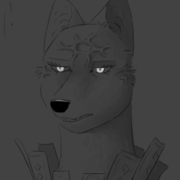 This surprisingly young, mysterious feranthro is not what she appears. Many feranthros seem to exalt Yuseta, leading to belief that she possibly carries a leading position despite her age. Yuseta has an agenda built from her pride developed from an apparent royal bloodline. Her fervor and pious has helped inspire the Lower feranthros to rise and begin terrorizing the anthros. To what end, only she knows.

Primordia is divided into three different sectors, these sectors identified mostly by the class of anthro that live there. A city has been built up around the Middle, slowly climbing upward and becoming more and more packed.

The first sector, known as the "Upper City," lies at the top of Primordia. It is a splendorous display of metallic skyscrapers and abstract structures, standing out greatly from the poorer landscapes below it. It is often said to be a symbol of the island's technological and evolutionary progress and marvels. Is it by the Upper City that Primordia itself is labelled as the "Island that Reached the Heavens." Feranthros are strictly prohibited from inhabiting the Upper City, and the city's crime rate is very low. There are four huge solar panels surrounding the city that act not only as energy absorbers, but also as shields.

The second sector, the "Middle City," is the main center of the working class as well as heinous and brutal crime rates. With a much poorer outlook compared to the Upper City, the Middle is home to anthros and feranthros alike, although feranthros mostly live as slaves. Plentiful open markets line this sector of Primordia, and is where much of the manufacturing and trading commerce travel through. Primordia food stocks are mostly created in this sector and stored in it as well. Although the Upper City also has factories, the Middle is home to many more of these structures for the production of material goods. Police and militia forces are deployed to the Middle very often because of the crime rates, and unfortunately, it only seems to get worse.

The final sector, the "Lower City," is one that most people try not to think about. Not much is known about the Lower City, although countless researchers and archaeologists are itching fiercely to dig into the mysterious culture. The Lower City is inhabited by feranthros, and the worst kind imaginable. Long ago when Primordia was reaching its higher points, the Premier had allowed the feranthros to keep this segment of land, although he could have easily ordered it to be annihilated by the government's already massive military muscle. Since that time, not much was ever heard of the Lower City again, but the activity in the Middle points toward a possible, subtle infiltration attempt.

The citizens of Primordia usually undergo a system of self-manufacturing to provide for the social and financial health of Primordia's economy. There are a number of large companies, but the main strength comes from the citizens themselves. Although Primordia has flourished in this system over a long period of time, it is beginning to slow whittle down in a period of lack of innovation and slowdown due to Middle City crime activities. The Primordian government has made attempts to solve this issue through varying campaigns in different parts of the market, although it did not help by a significant amount. The government has just recently started to look into trade; it never looked into this before simply because of the government's paranoia in dealing with other civilizations. Trade is still not much of a high priority despite the economic health, but the attempt is still being made.

The currency of Primordia is simply "Currency," although the government has definitely made it a mission to figure out a better name.

There are two types of beings that make up the civilian populace of Primordia.

The "Anthros" are the main bunch of the population, carrying a superior intellect that has deemed them more than capable to building an advanced civilization, which is exactly what has happened. Anthros are said to be an evolutionary rise from the Feranthros, although a good portion of people deny this, not wanting to have a history of association with their kind. This noted, most Anthros in fact look down on the Feranthros and see them as nothing more but slaves or filthy sub-anthros. Some have even protested against the government for allowing them to co-exist in the Middle and existing at all in the Lower City.

The "Feranthros" are beings that have a similar look to anthros aside from some differences in anatomy, some examples being longer necks and digitigrade feet. They are looked down by the anthros almost to the point of being considered entirely feral, which is where their name originated from. No one really knows what the feranthros actually call themselves. Feranthros do not inhabit the Upper City at all and instead live life in the Middle City either as slaves or criminals. Feranthros do, in fact, have a conscience, and have made attempts to reach out and express themselves, although these campaigns have usually ended terribly, leading to more violent outbursts and riots for better and more fair treatment. Not all feranthros are treated badly and actually have very caring masters.

Although the laws of Primorida are pretty down-to-earth and familiar, there has been a huge demand and need to shape things out with the feranthro populace. The government clearly has made attempts to keep peace with the feranthros for an amount of time through some of these laws. More significant laws concerning feranthros are laid out below.

The copulation of Anthros and Feranthros is strictly forbidden. Masters cannot mistreat feranthros slaves, even verbally. Militia and Police Forces are allowed to terminate delinquent feranthros as they see fit or forcibly detain them if they are deemed suspicious.

As mentioned above, the Primordians have not taken high interest in exploring surrounding lands, and therefore do not know much about other civilizations. There have not been any official expeditions and the government leaves it at a lower priority, despite its interest in trade. The populace generally do not dare venture off the island unless they have their own means and a strong drive.

Appearances by the cast Inside the Quest.