A story about a guy named Oren Loper. By Bromeliad. Takes place in the same universe/continuum as Eivr.

The main protagonist. A sheriff and a Vidder. Oren's a harried sheriff in Hearthback, a small frontier desert town bordering an expanse of desert called the Wastes. He can come off as gruff and has little patience for assholes, but he's a nice enough guy. 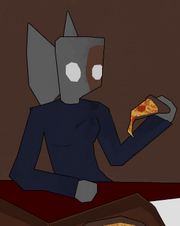 Nessie Squires is Oren's Deputy, sex buddy, and best friend since Authority Academy. She's entirely disorganized and a little ditzy, but she's fairly brave, friendly, and good with a sword and board. A good cop/friend.

Sheriff Oren Loper and Deputy Nessie Squires investigate the discovery of the corpse of a young man who went missing a week ago with his brother. When they arrive at the scene they find him mutilated with a rune carved into his forehead. The body's in front of a large abandoned plantation. They investigate and end up going toe-to-toe with a murderous one-eyed mage, managing to escape with their lives thanks to the undertaker. They find the second brother, but he dies soon after.

Oren's called away from Hearthback by Allen Arbock, a recently murdered CEO in the body of the Hatchtown Hacker, an infamous serial killer. He ends up solving the case thanks to interviews, reasoning, and several suspicious marks. He is hindered along the way by Ferdinand Blejwas, a bent cop with the city under his control. The criminal's eventually brought to justice, and Oren heads back to Nessie and home with a fuller wallet and a new enemy in the city.

This chapter begins from the perspective of Don, a man who did a Bad Thing. Don is punished for it by a man named Joseph, who takes him into the desert and slits his throat. We then return to Oren, who is interrupted in the middle of breakfast by Orpheo Diraiphe, a mage from a different quest. He explains that the mage Oren killed in chapter one was on an Alienation, which he describes as "a sort of magical thesis paper". He explains the nature and purpose of the small marble Oren found in place of the mage's body, and entrusts it to Oren's keeping. It is an oculus: it can be used to create a third eye that grants anyone increased magical power.

Oren and Nessie then head into town so Oren can tell her about the oculus in a safe place; while there they run into Joseph Bird and Sofiya Daniels, old acquaintances and known criminals. Their heartwarming reunion is interrupted by a phone call from Theo "Grease" Galvin, a mechanic and friend of Oren, who wants him to retrieve a note he describes as Very Sensitive. They track it down to a bank deposit box, but when they arrive, Theo and his friends have gotten there first. After a tense battle, Oren arrests him and retrieves the note. He decides to take a look at what it is and is surprised.

Oren wakes up tied to a chair and gradually recalls that on his way to Anchorturn to drop Joseph off in prison, he was ambushed by a group of highwaymen. He is freed from the chair by a mysterious illusionist, and subsequently finds Nessie and subdues both the guards and their replacements. Oren and Nessie take one of their cars and try to escape, but they run out of gas before they make it to Anchorturn. They spot a building on the horizon and go toward it: it turns out to be a large ruin that they enter and investigate. They are interrupted by the angry mentor of the mage they killed. He is bent on revenge, but after a harrowing fight in the physical and mental worlds, and with some more help from the illusionist, Dahlia, and her friend Pyramus, they kill him and are picked up by Allen Arbock, who gives them a ride back to Anchorturn.

Elsewhere, it is revealed that the highwaymen were hired to capture Oren by Blejwas, who ensures this fact won't be spread around by killing them all.

Appearances by the cast Inside the Quest, sorted by the threads they ran concurrent to and between.