The Slave the Thief and the Slut: Rise of the Vile Bloods

A Dungeon and Dragons board game in quest format. Plus, TGChan controls one of the players outside the game. 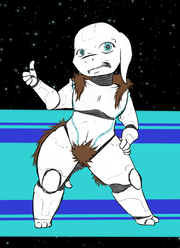 Aalos is a biosynthetic android, designed to emulate a living body despite being constructed from modular pieces. His form is currently that of a male Kobold, with detachable fuzz that acts as clothing. He is the player that TGChan controls, with a mission of studying the local life forms and learning what he can about their social structure and various activities. Officially identified as TG007, seventh of the TG android line, he comes equipped with a customizable member to suit most potential partners, as well as a self-defense taser to prevent termination, though thanks to a request from model TG006, the taser can also be used on any willing subjects for the sake of study. Controls the character Kelda. 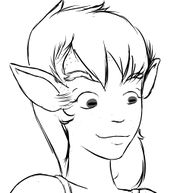 Doukissa is a female faun, sporting deer-like legs, elven ears, and goat-like eyes. Her "Job" is actually online gambling, where she counts cards just enough to make a profit, but not to draw attention to herself. She takes care of her brother, Varonos, and has "Adopted" Aalos under the term of "Pet" to grant him protections that don't exist for robots (Namely because there aren't any laws whatsoever governing robots). Though there are subjects that will make her blush and embarrassed, she is also open to talk about sexual situations. She thinks that Prince is cute and sexy, and has a "Friends with benefits" relation with him, though the idea of something committed makes her nervous. It was mentioned that Prince is like a brother to her, as well, though she finds the idea of incest to be in poor taste. Controls the character Edrukk. 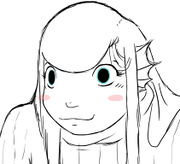 Prince is a male Undine, though it may be difficult to tell he's a male at a glance. His eyes are typically a bright blue with human-like round pupils, but when he gets aggravated, the irises turn red and the pupils change to a slit shape. He is protective of Doukissa and Varonos, quickly leaping to threats against Aalos, who he doesn't yet trust. Supposedly works at a cafe, though nobody knows what he does there. Acts as the DM for the game, controlling all NPCs.

Younger brother to Doukissa, he is also a faun. He's distrustful of Aalos, thinking that a robot from nowhere is probably going to go terminator, but he's willing to let Doukissa handle things. Controls the character Cid, though with this being his first game, he hadn't planned out much backstory. 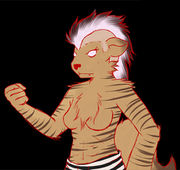 Aalos's character is an "Uplifted" Gnoll named Kelda Oxgutter. As an uplifted Gnoll, her size and phenotype more closely matches that of a human than a werewolf, though she does still have a pseudopenis. Kelda is a Bloodrager, meaning she is a mix between a spellcaster and a barbarian. Necromantic powers flow through her blood, and she has the trait of Blood Conduit, meaning that her spells are cast through martial techniques rather than runes and mantras, allowing her to stick to physical combat and still dish out the spell effects, as long as she is unarmed. The Campaign arrest for Kelda was Vandal, meaning she is better able to break objects and equipment.

Doukissa's character is a male Dwarf by the name of Edrukk. Edrukk is a bartender and a cleric, though at the moment his traits are unknown. His campaign arrest was as an Enemy of the crown: His backstory involves using his profits from his bar to set up various anti-devil groups, though they were slaughtered and he eventually captured.

Varonos's character is a male Tiefling by the name of Cid. Cid is a Magus, though, as with Edrukk, his traits are currently unknown. His campaign arrest was that he was framed for the theft of a jewel; the actual thief was his Twin Brother, who had supposedly died in a fire some years ago.