A story about two mercenary girls, a jet pilot with a serious task, and a certain perverted blue orb. Contains a lot of 8-bit, pixel art and a FFT rip-off battle system. Also, lots of inconsistency in art style. Created and kept alive by ThatFuckingFeline.

One day when a pair of female warriors (Zariene, Asgeria) were on their test to become accepted into an elite, a FUCKING AIRPLANE crashed into the shore nearby. They ditched the mission to rescue the pilot (Kanes). The next week weird shit has been happening, and apparently the one suspected has put all the blame on our protagonists. So the three had to jack a boat, kill some thugs sent after them and are currently on their way north, running away from the hellhole they're wanted in. While going through a canyon they're attacked by a group of soldiers from Zein on a mission to seize Kanes and stop him - they're defeated, and one of them surrenders in order to be revealed as a very young soldier, named Denn who was conscripted against his will. They decide to take him along, and bust out of the mountains in a crab-shaped tank they seized in the battle.

A young red-headed mercenary. Quite skilled in slicing her enemies with her two short swords. Hates armor, or anything else that may slow her down. She likes fighting in a quite creepy way.

An unlucky pilot from an isolated, advanced place. He's on a serious mission to warn the right people of an upcoming inevitable war. Has two powerful handguns, able to take out most enemies with a single shot. 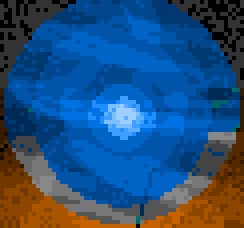 "I'm an orb sitting on your desk that can only glow and make purdy piccurs or words in your head, and I'm not having an existential crisis."

A crazy inventor and a blacksmith. Made Zariene and Asgeria's weapons, using an unknown metal.

A crazy army leader of Airan, he disappears for a week then blames all the trouble on the protagonists for convenience.

The Orb is able to speak to anyone nearby, and receive non-spoken messages on physical and eye contact. Its field of vision is 360 degrees any axis from its current location. Input is welcome at all times, but mostly expected when the > mark appears in the bottom bar thingy.

Available with CHECK command at all times, always up to date.

Turn based battle, similar to Final Fantasy Tactics and the likes.

Damage rolls: CLOSE - 1dC+WEAP GUNS - 1d50 per every bullet that hits. MAGIC - Dependent on the element and level used, can be affected by a barrier, unaffected by the next ones in line. (exploit it!)

Hit rolls: (these are difficulty rolls!) CLOSE - 1dC(-2 offhand) / diff enemy SPD RANGED - 1dR (-2 offhand, +2 aimed) / diff distance Aiming takes one additional turn. MAGIC - Does not miss, however it takes several turns to channel depending on the core and spell level you're using. Can fail if you're hit during that time.